I was in London this weekend reading Elizabeth Gilbert’s, The Signature of Things. I had read a review in the Irish Times which described the book as reflecting an interesting journey through the life of an American woman of science during the 19th century.

The book races through the life story of her father who through pure stamina and determination to pull himself up by his bootstraps after a poverty stricken childhood, travels the world, collects plant specimens and emigrates with a Dutch woman to Philadelphia to become the richest man in the State. I quite enjoyed the tales of his travels, though it was related in preamble to the introduction of Alma, the main protagonist, and so had a sense of simply providing the back story.

Alma is a chip off the old block and the rest of the book focuses on her journey through childhood and adolescence into womanhood and old age. The character is drawn well, but I found myself wondering, with suspicion, where all this was leading to. Alma is a botanist. She is a scientist. This is her journey of discovery into the nature of humanity, human emotion and spirituality. It discusses existentialism in a rather over stated way which I found irritating. I felt it was all rather obvious and I found the metaphysical explorations trite. There are nice character descriptions and some interesting character portrayals, but they serve only as satellites for Alma.

Much more enjoyable was getting up at dawn with my brother to go and watch the Classic Car Race through London to Brighton in the early morning light (it is extraordinary how many people are about at that time in the morning on a Sunday). All cars had to be over 100 years old. It was wonderful. We stood by the pedestrian lights on the Brixton Road and kept pressing the button so they had to stop and we could see them. (Sorry to those people who had to get out and start pushing or cranking to get going again). Polished paint and brass, fine wooden wheels, many had steering sticks as opposed to wheels and were open to the freezing wind. They trundled past bright red, sunshine yellow, brilliant blue, stately green with drivers and passengers all with woolly, and fur hats and scarves flowing.  I loved the wicker baskets stacked on the back, the brolly stands on the running boards, filled with colourful umbrellas. There was one running on steam with a man shovelling in the fuel. The headlights on another were flames encased in glass (presumably lit with paraffin). Today modern cars come equipped with coffee holders. One of my favourite cars had three glass and brass flasks of amber liquid with glass straws. Lovely. They made my day! That was truly spiritually up-lifting. 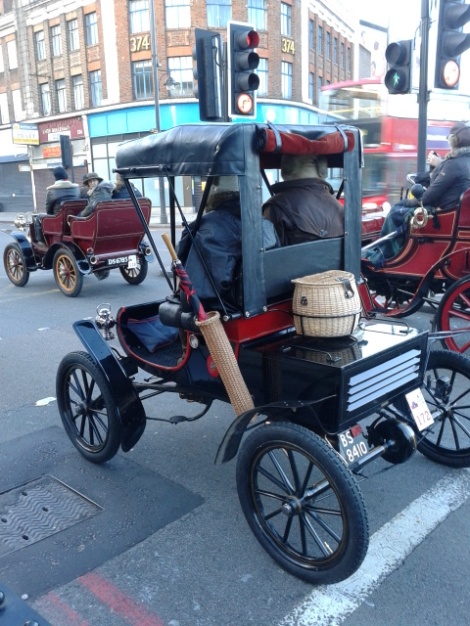