I have just kissed the Blarney Stone and it was no mean feat. First you climb a 50 metre shrinking spiral stone staircase in a narrow stone tower on tip toe. It shrinks because each step gets smaller the higher you get (remember  in the 16th century folk were only about five foot high and had small feet, and I am 5’10” with size 8). You then lie down on your back on the parapet, hold on tight to iron bars, lower your head backwards before planting a smackeroo on something the fella holding on to you says is the Blarney Stone. It was amazing. I sat back up and burbled a stream of witticisms and esoteric terminology never before heard.

I was impressed with the Blarney Castle experience. The castle itself is exciting with towers, turrets, murder holes, bathrooms, dungeons and even a ‘family’ room. I could just imagine Chief Cormac MacCarthy and his three girls (who also had their own dressing room above) snuggled up next to the roaring fire on which a wild boar was roasting and watching Disney films.

The gardens are varied: wonderful herbaceous borders, poison gardens, arboretum and pinetums, sculptures, lake paths, and woodland walks with strategically placed cafés and gift shops where you can purchase Blarney Stones (but it won’t be as good as the real thing).

So, I am in Cork, celebrating twenty five years of marriage. We spent our first night in the city. I had booked us into the Cork Opera House for a treat and a bit of culture. It was a one man show written and performed by Ray Scannell called Deep. The blurb described it as a multi media performance depicting the social and political influences of Cork in the eighties through music. Interesting, I thought. So bright eyed and bushy tailed (that’s the Blarney stone coming out), we presented ourselves in the grand  foyer of the Cork Opera House only to be shown the door and told to go round to the back entrance which was carpeted with cigarette butts and flyers. There we were directed into a small room with a stage and 15 rows of plastic uncomfortable looking chairs. Ah well, the best laid plans and all that…

The show, though, was mesmerising. Depressing, heart rendingly bleak but brilliant. When we sat down in the plastic seats, the multi media backdrop suggested this was a show about house music. House Music??!! Where had I brought us? Ah well, maybe I’ll be able to impress my son with my newfound knowledge, I comforted myself. But the show was riveting. Ray Scannell performed as a DJ taking us through the story of the absolute joy of a young teenage boy caught up the discovery of a new, different, compelling music in a local Cork night club which spilled into dance, love, drink, drugs and more drugs against the backdrop of unemployment, poverty, violence, emigration, loneliness. It was compelling, haunting and cleverly done. Check it out if you get a chance.So twenty five years of marriage…also compelling, cleverly done and certainly no mean feat.  Not sure it’s a performance you’d want to see! 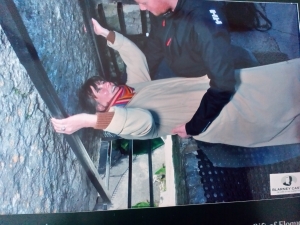