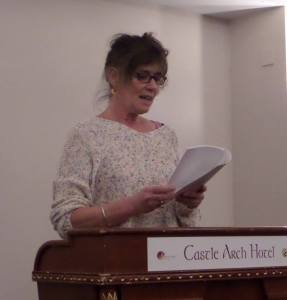 I went to hear Kevin Barry at a writers’ workshop, organised by Stinging Fly, a few weeks ago in the Writer’s Centre. I love Kevin Barry, his voice, his books and his looks. He described himself as slug bouncing a rubber ball against a wall when he spoke to my MA group in 2012 and somehow the image works for me. I also like his recommendations. This time round he suggested we read VS Pritchett so I downloaded ‘A Careless Widow and Other Stories.’ I can, in turn, recommend them myself.

They are beautifully written with perfect detail. I loved his description of the ocean, “the sky was like another country hanging over it”, or his character who has “a high sandy voice, with grit in it.” I learned from VS Pritchett that I need to give my characters more detailed descriptions. But I was able to draw some solace from him because he vindicated my voice.

All his characters are strong, vigorously drawn and slightly odd but I felt immediately at home with them. In some strange fashion, each story is detached in a very English sort of way but also very familiar. I can’t say what it is exactly, I just felt reassured by his stories. I like the slightly wacky, off kilter style. It reminds me of my own work. I am in no way describing my own writing as being anything like VS Pritchett’s, not at all, but maybe our shared nationality does reflect something in common. I do not have his stretch of imagination or pithy style. His work comes from a pool which is clear blue, rippling, breathtakingly sharp and exhilarating. Sadly, I am still lurking in the mud at the bottom of that pool, clearing sludge. I can only learn! But there is a voice there I understand or maybe, to keep in metaphor, a ripple I recognise.

My next read was riveting rather than rippling. After reading John Banville’s review of The Blue Room by Georges Simenon (Irish Times, Sat 21st March) I downloaded the book (the joys of the Kindle). I like John Banville’s books. I like his prose which I find is shadowy, opaque and complex and I like his focus in recent books on time and memory. In contrast, I found The Blue Room a beautifully sparse book but also, at the same time,  incredibly intricate. It is very clever. It is the story of love, life, a murder and a court case. It is told backwards by a voice on trial  which reels in all the detail and complexity of everyday life,  love, marriage, family, work but has the detachment of the court approach. It is a clever technique. Each event and explanation takes place in a room and each room has it its own individual interpretation. The voice and the place are key. The finale is arrived at slowly and has the feel of a climax. It is a beautiful book. It has passion, depth, and detachment. Banville praised it highly. I wonder if a writer admires another’s work because they recognise the voice and or if they like a book because it’s not their voice at all.

Now, I have just started Papillon by Henri Charriere, and it’s very different altogether. It seems very Twentieth Century. Imagine being old enough to be able to say that! And what do I actually mean. Is there a 20th century voice? Is there a 21st century voice? And presumably it changes according to nationality. Hum, I’ll have to ponder on that and get back to you.. Better stop, before I go off on a different track altogether.