At one of the International Literature Festival events in Dublin last Friday, Margaret and I, along with similar looking and attired folk, filed into the upstairs bar of the Lord Edward pub next to Christchurch and scattered to the tables and stools. There, we were treated to a reading of Flan O’Brien’s drama, Thirst.

In Thirst, following the local sergeant’s arrival ‘after hours’ with his note pad, the audience is transported to a hot desert by Mr C who over a period of forty minutes described his war years as a duty bound soldier where the feet were caked in scalding hot sand so that the very skin peeled off, the throat was parched with arid dried sun and the water bottles had to be cast away because they were made of aluminium, the packs, guns, knives were the weight of elephants, the eyes were brimming with sand and dust, the sun was a furnace into which they travelled, indeed chased the enemy over dunes, and more (forty minutes more), all to convince the sergeant he needed a pint after hours, and indeed, we were all reaching for our glasses to quench our thirst. It was very funny, very Irish and a brilliant performance. 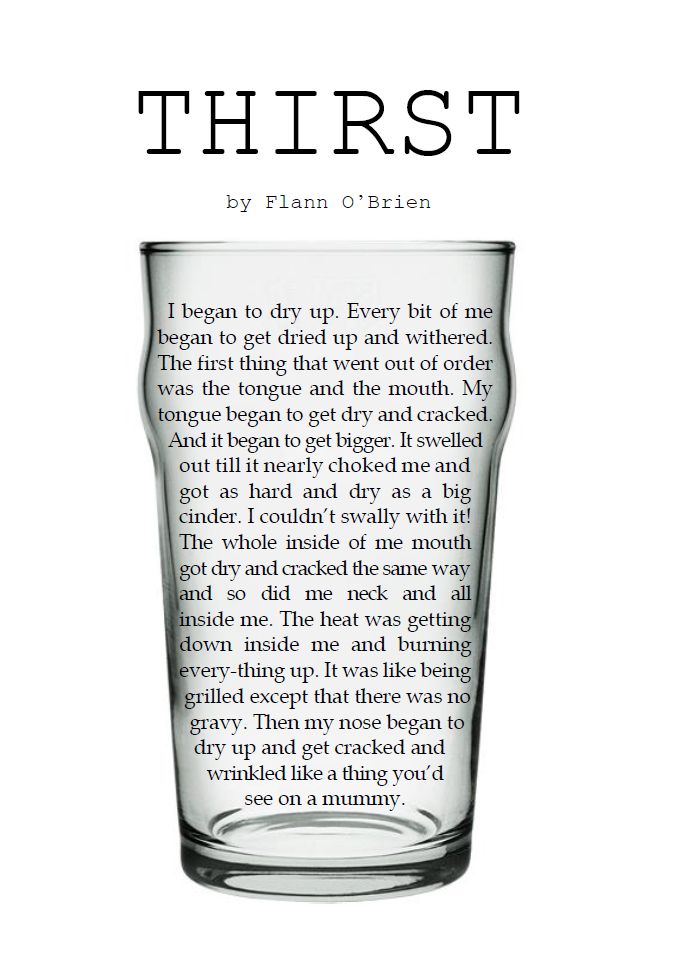 I was less enthralled by Yianis Vouroufakis, though he is rather delightful on the eye and I am sure that if we were in one to one situation with a bottle of retsina (Ruth Ennals, are you reading), I would be totally charmed.

He gave an absolutely devastating description of an EU which was undemocratic, unwieldy, in the hands of megalomaniac bureaucrats and indeed was set up as such a body from the very beginning. Yet after lambasting the mechanisms, behaviours, the corruption (he said that irrespective of the Greek decision to default, the EU paid the bankers and sent him the invoice), he believed that Britain should stay in. I couldn’t believe it. Yianis justified his view by saying you needed common standards, that the political loss would be huge and that the EU was already deteriorating because of its hubris. Speeding it up would create havoc. I wonder what propelled him to say this.

I have been alternating in my views about Brexit (although I don’t have a vote as I have lived more than 15 years in Ireland). My instinct and feeling is that the EU is a conglomerate of bankers and power elites which do not respect democracy and certainly put the interests of the rich and powerful first. However, I certainly do not want to be associated with UKIP, Gove and Boris Johnston who would appear to want to return to Little England, and have unpleasant and racist views about immigration and refugees. I believe firmly in human rights, international conventions, and the need to draw up fairer, equal policies in conjunction with the experience of other nations and countries. I believe we need to rethink what we want the EU to be. I am sure Mr Farage and others will not have in mind the kind of EU wide supports and network that I believe should be put in place.

Yianis described an unwieldy monster when he described the operation of the EU. And he was sceptical of its reform. He thought the Brits were damned if we did leave and damned if we didn’t. I think it is better to attempt change, and not fear it. Maybe the way to do this is to leave because at least it will change the status quo which at the moment is only providing people with unemployment, hysteria, right wing politicians and promulgating fear throughout society. Surely it is better to do something rather than nothing. Maybe this is the revolution, we just don’t know what revolution looks like any more.

Anyway, Yianis helped me think as did Lesley Courcof (an English friend of mine whom I met for lunch the next day before she left Dublin after seeing The Boss) and Margaret Barry with whom I went to the International Literature Festival events and who had to listen to my passionate ranting and ravings with a patience and a humour that only Margaret has. I thank them all.

My few days ended with a return to Cavan to see ‘Underneath’, a performance by Pat Kinevane at the Town Hall (to which, if you look back through my blogs, you will see previous references). ‘Underneath’ is about bullying, the power of the strong over the weak. He makes his point with sensitivity, humour, and his set is of the most beautiful, stark style. He is sinuous, sensual. His movements are graceful, his voice is huge. Performances like this is what we live for. Sadly, whether the EU exists or not, or Brexit happens or not, there will always be the weak and powerful. I just hope we will always have art and literature,  to help us reflect on our vulnerabilities and enable us to think, and listen. (Are you listening, Irish Government?)