I watched The Little Prince by Antoine de Saint Exupéry  late last night on Netflix. I had read it as a child, and forgotten its tale, which is ironic given that it reflects on the loss of childhood innocence to the grim experience of the adult.

The first image in the film is a drawing of a boa-constrictor eating its prey whole. I sat up, suddenly alert. I remembered that drawing. I had copied it. And I had traced the illustrations of The Little Prince over and over again sitting in my little box bedroom with its pine cupboard, and dressing table, its fold up bed and the pine chest in which the bedclothes were kept, and on top of which I laid the green Clarke shoe box beds of all my teddies when they were sick. I could suddenly smell the wood, see the pattern of dark brown knots in the grain, and the Christmas tree lights flashing in the window of the house opposite on Christmas Eve.

I watched the film entranced, tears rolling down my face, as I saw The Little Prince watering his rose on a planet, talking to the aviator sitting deserted in the desert. Befriending the fox. Flying the red plane.  It was one of those moments where you suddenly realise that you are more than you seem: you embody a life time of boa constrictors, teddies, roses, little princes, magic, planes, travellers, all of whom you have forgotten, but these things are starlight buried inside you.

It was a similar experience when I saw excerpts of Kes while watching the excellent Ken Loach documentary this week. I had that same familiar stirrings of a different Kate to the one sitting here. It was an older, more nuanced Kate than the Kate reading The Little Prince. But the theme of Kes was the same. It showed the wilderness of childhood innocence and love juxtaposed against the constraints of the mean and bitter social systems adults impose.

It struck me that it was a far cry from the existentialists with whom an ancient Kate has been absorbed this summer as a result of reading Sarah Bakewell’s ‘The Existentialist Café’. Existentialism and phenomenology remind me of the thick black graffiti scrawl I saw scribbled everywhere in Athens and Thessaloniki in Greece in June. The philosophies of existence, intentionality, responsibility expounded by Sartre, Nietzshe, Heidegger, Husserl, are certainly the stuff of adults rather than children but maybe their philosophy evolves from that child hood perspective which is rooted in how the ‘I’ relates to the world, or conversely how the world relates to the ‘I’.

More recently, I read Solar Bones by Mike McCormack, which is a tour de force, and also examines the ‘essence’ of man. Mike was my fiction tutor at Galway. He arrived in class with hat and handouts.  I could listen to him for hours. He meandered easily through a world of fiction quoting, referring, with poetic grace and humour. When I left class, it was as if I had travelled in another realm. I have read Mike’s other novel and volumes of short stories. I found them quite different: quirky, with an awkward grace. I liked them but Solar Bones is wonderful. There is not one full stop as the protagonist meanders across the pages reflecting on his life as a middle aged son, husband, father and engineer who lives on the edge of the western world filled with rampaging growth and hedonism. There are wonderful descriptions of self, fatherhood, love and politics. They are poignant and humorous. It has a pertinent perspicacity fleshed out in convoluted wonder. It was like listening to Mike in class.

So, now, as I try and draw my summer learning together,  I find myself thinking…It is my personal responsibility to filter my individual experience and existence through the innocence of my childhood and revel in the present before I die. 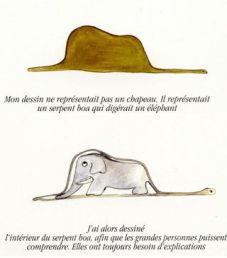 One thought on “The Little Prince and Others”