This summer has been a hot-pot of activity flavoured with fabulous food and intense reading. The Greek fare was great, lots of crispy sardines, mackerel, oily potatoes, feta, and tomatoes (I also got hooked on cardamom tea there).  The tagines, fruit, breads in Morocco were delicious, and the three pods of peas and six green beans from my greenhouse were very nice too. Wherever I have been, London (Sainsbury’s dates: succulent and tasty), Manchester (trifle and pork pies) Limerick (orange blossom rooibos tea), Galway (chowder and the Mezzine starter in Quay Kitchen) food is a factor. So I was delighted to read recently Pomegranate Soup by Marsha Mehran.

This is a quirky book set at the foot of Croagh Patrick about three Iranian sisters who were terrorised during the revolution. They escaped to London and poverty, worked their way up and came to open a small café in Mayo. She describes the traditional ‘mafia’ set up of rural village life and how the three sisters use their exotic recipes and dishes to entice the villagers into their hearts. It is a delightful book which shows rural life at its worst and its best and each chapter revolves around mouth-watering Persian dishes: Red Lentil Soup, Lavash Bread, Abgusht. One of the most intriguing sounding dishes is Elephants Ears (see recipe at the end). The story is full of drama, passion, greed, mysticism and revolution.

The author, Marsha Mehran, was the topic of a recent Doc On One programme (RTE R1) called An Open Verdict. Mersha, herself an Iranian refugee, lived in Argentina, America, and England. She eventually married an Irishman and had homes in Mayo, Leitrim and London. After her husband died, she became a recluse. In 2014 she was found dead in her holiday cottage in Mayo. She was lying down on her front on her bed, wearing only a cardigan, surrounded by saucepans of liquid, later discovered to be urine. There was no food in the place. A bizarre and sad ending to an author who crammed her book with food, life, love and revolution, all on the side of a mountain in Mayo.

Of course, drama, violence, love, and passion were the central themes of Elena Ferrante’s book ‘The days of Abandonment’. The book describes the tortuous experience of misery, fear, depression and madness experienced by a wife whose husband abandons her. It shows the slow deterioration of rational being with frightening clarity through detailed observation. Elena Ferrante’s writing reminds me of gamma rays. Gamma rays have the smallest wavelengths and the most energy of any wave in the electromagnetic spectrum. They are produced by the hottest and most energetic objects in the universe, such as neutron stars and pulsars, supernova explosions, and regions around black holes – such is the excellence of Ferrante’s writing. The character describes herself as experiencing an ‘absence of sense’.

“I had an excessive reaction that pierced the surface of things.”

“And where did you end up?”

The characters of Pomegranate Soup were at the mercy of the world and Elena Ferrante’s character was at the mercy of her husband and own mind. I wonder if my reflection on a book influences my understanding of the next one?  After reading Elena Ferrante, I read The Plague by Albert Camus. In this he focuses on the reaction of various individuals living with death. A seaside town in France gets the plague. The town is isolated from the rest of the world and Camus uses this as a tool to show how, while we are social animals used to operating within the circumscribed restraints of society, it is only the reactions of the individual that matter and are the essence of life. Religion, love, community are worthless. It is only the self that exists. I suppose Elena Ferrante’s character reflected that too, and indeed, Mersha Merhan, herself. All very intense. I honestly don’t know how a ‘valuable’, ‘honest’, or ‘effective’ an individual I would be without my loves, community and beliefs.  Perhaps, I am worthless as an existentialist! However, (with a sigh) I would recommend all three books.  But, to cheer you all up, here is a recipe from Pomegranate Soup.

3 ¾ cups of all purpose flour

Beat egg. Add milk, sugar, rose water and cardamom. Slowly mix in flour, kneading to a dough. Roll out on clean surface with floured pin until paper thin. Using the rim of wide mouths glass or cup, trace and cut out a circle. Pinch the centre of the circle with thumb and forefinger to form a bow. Set aside. Repeat until all circles are done. Heat oil in deep pan. Fry each ear for 1 minute. Lay pastries on paper towels to cool. Sprinkle with sugar and cinnamon mixture and enjoy.

You know what, I think I will only read recipe books for the next few months. 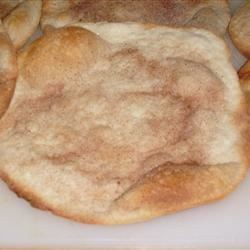 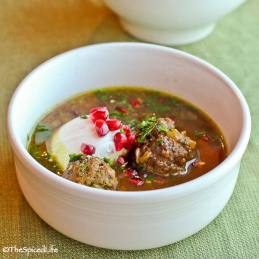 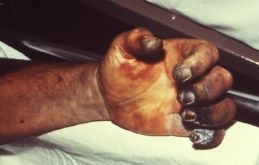 One thought on “Making Sense of Pomegranate Soup, Elephant Ears, and The Plague… by a probably worthless existentialist”