I am just back from a few days in Belfast. We stayed in a great apartment overlooking the Lagan and wandered around the city centre on the first afternoon. I’ve always liked Belfast, it chimes for me of Northern England: messy, incoherent streets with the occasional wow factor in buildings, like the Opera House and City Hall. During this particular meander, the city was stuffed with tourists wandering around, turning maps upside down, stopping on street corners. Streets seemed to be cleaner, buildings shinier. The city seemed to be prosperous, booming, none of the jaded, bombed out fatigue of the past.

The next day we walked along the river walk – through the old Docks, littered with art, artefacts, tourism trails, old ships, the magnificent Water Front, the Arena and finally arrived at The Titanic, itself an extraordinary building. It rises up from the Harland & Woolf Dock, a silver, concertina like structure, solid, assertive but also looking like it might fold into nothing. It was humming with people and taking the tour, I felt part of a well-oiled machine. I was impressed. I learned a lot about ship building; the gantry, rivets, and Belfast, itself a hub of industrialisation at the turn of the 20th century. I learned about the Belfast Ropework Company, the biggest and best in the world, the linen factories, the glass factories, the breweries. We traversed the experience of working the gantry in a rail car, rattling up and down, through heights and depths, screens of men drilling, banging, balancing, hammering, welding, made me aware for the first time of the dangers, the skills, the courage and the pride of the ship builders. The exhibition showed me the real story of the Titanic from its planning, drawing, manufacture, it’s fitting out with the best of everything: luxurious Axminster carpets, mahogany, oak, brass, gold, furnishings of the highest quality, chandeliers, four poster beds, porcelain basins, menus including potted shrimp, veal, corned beef, ox tongue, soused herrings, galantine of chicken, custard pudding. And then, after all this magnificent build up, it was gone in a flash, very appropriate. All that I saw next was a gin bottle and a china plate floating in the debris field at the bottom of the ocean.

When I was driving home, I was thinking about what it must have been like to work on the gantry. The men would have to be skilled, courageous and have their wits about them to be working thousands of feet in the air with heavy tools and no safety provision in the elemental hazards of wind, rain, cloud, sun and no protection. So different to the miners crawling along dark, dank, dirty shafts. Both trades involved such dangerous work yet men were paid a pittance and many lives were taken. It is a warped world we live in.  I couldn’t do either, and I don’t think many could nowadays.  But in a sense, at least the ship builders must have felt the power and glory of working in the sky and creating something so extraordinary.

The reason I was in Belfast was poetry. I attended a poetry event at the Eastside Arts Festival, an event co-organised with Over The Edge, Eastside Arts Centre and Poetry Northern Ireland. To get there, and later to the hotel where our friends, Over The Edge facilitators, Susan and Kevin, were staying, we walked through close knitted, two storey, red bricked terraced streets of houses hung together with pennants and union jacks, conjoined with streams of bunting fluttering over gardens. On many corners were murals of militia, firearms, words of freedom and unity were painted with precision on walls.  Suffocating defensiveness or claustrophobia were the words that muraled my mind.

The event itself was wonderful. Poems flowed. The open mic wound around the room while people shared poems that reflected on love, division, equality, nature, silence, uncertainty, violence, change. I felt privileged to be able to contribute. The East Side Visitors Centre has been open a year. It is light airy, a café and exhibition space and the people are warm and friendly. It overlooks a skate boarding park which also celebrates CS Lewis and Aslan, the lion, stands proud in bronze. While waiting for the poetry begin, I watched two British Bulldogs skating on boards with great skill and panache, three legs balancing while the fourth leg pushed. I felt privileged to be British, yes, but happy to be living in Ireland. 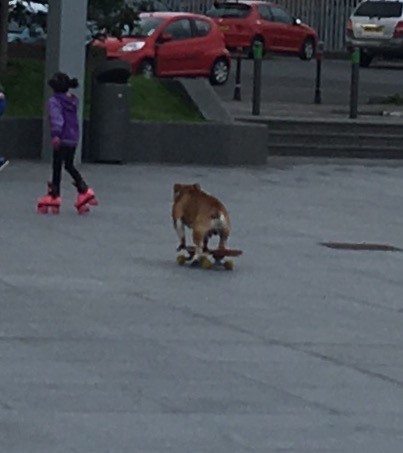 2 thoughts on “The Best of the British Bulldog”