Paris glistened in the soft rain. The boulevards and architecture, the columns and statues undulated, illuminating the grandeur and glory of the city. It wasn’t cold, so Roisin and I meandered through the silvery sheen, drinking in my old haunts, admiring the hauteur and the glamour. St Michel, La Bastille, St Chappelle, Notre Dame, Pompidou, L’Orangerie, Tuileries, Opera, Le Marais, the beautifully restored Picasso museum, and of course the solitude of the Monet’s lilies.

She has such style, Paris. Walking along the Rue Francs Bourgeois in the Marais, we gaped at the boutiques, the fine clothes, the designer jewellery, the leather, the patisseries. The lanes of the latin-quarter were thronging with restaurants, bars, cafes. The walk by the Seine was masked with golden leaves and draping willows. The Tuileries gardens were shaped, formal and glowed golden in the haze of the rain and sandy puddles. The Rue de Rivoli boasted the tradition of Printemps, BVH, and other well-known Parisian department stores rising into the oval slated rooftop attics. Well appointed, Christmas trees guarded the sapphires and emeralds of the tastefully lit, jewellery palaces in the Place Vendome where we had afternoon tea in The Ritz.

And, at the moment, Paris is full of Picasso. All his masters are gathered there: in the Picasso Museum and in the Gare D’Orsay. Picasso has featured greatly in my life, though it is only recently that I have realised this. The portrait of Dora Maar used to hang on the stairs in my best friend’s house when I was a child. It used to frighten me a little. When my mother lived in Paris, I used to visit the Picasso gallery around the corner. Then it was small and intimate, and I used to take my book and my time. At the Picasso exhibition at Tate Britain (in 2012), I inched around the paintings, forced into a thick weaving line by a crowd of Londoners, a line that Picasso might have painted himself, examining in detail the musical instruments and faces hidden in the art. It was a very sociable line and I wrote a poem about it which was first published in Skylight 47. And last year, I really enjoyed the bawdiness and excitement of the Picasso exhibition at the Tate Modern. This weekend, I loved re-vising all my favourite paintings which had gathered there. Imagine, I know enough of Picasso’s work to have favourite paintings – which I have to say are not the Harlequins. They are so terrifying that I pass by quickly.

But, in terms of art, the coup de grace of the weekend was probably the Atelier des Lumieres which Susan Miller du Mars and Kevin Higgins recommended. It was truly electric. We were half an hour early, so we sat with an aperitif (un ricard, s’il vous plait), watching late Saturday afternoon play out on the rue St Maur. The children returning from an afternoon party, dressed in batman and superman capes, holding hands with their parents. The good-humoured refuse collectors negotiating tight street corners. A beautiful Van Gogh light spread across the evening. Then Róisín and I, along with a hundred other shadows, surged into the ‘Atelier’. Light and electricity poured across the walls, the floor, our faces. The portraits and pictures by Gustav Klimt undulated, weaved, spread, shimmered, limbered to music. They were reflected everywhere, and over everything. We sat, entranced, on the floor and watched and listened. It was glorious.

I say the Atelier des Lumieres was the coup de grace of the weekend, but maybe not. After extensive late night existentialist discussions about the meaning of life on Saturday night prompted by eating in Les deux Magots (the hangout of Jean Paul Sartre and Simone de Beauvoir), on Sunday morning, I simply sat and stared at Monet’s lilies in the Orangerie. It was an appropriate way for me to commemorate the 100 years of the Armistice of the WW1 with the bells of the Paris churches and cathedrals ringing in the background. 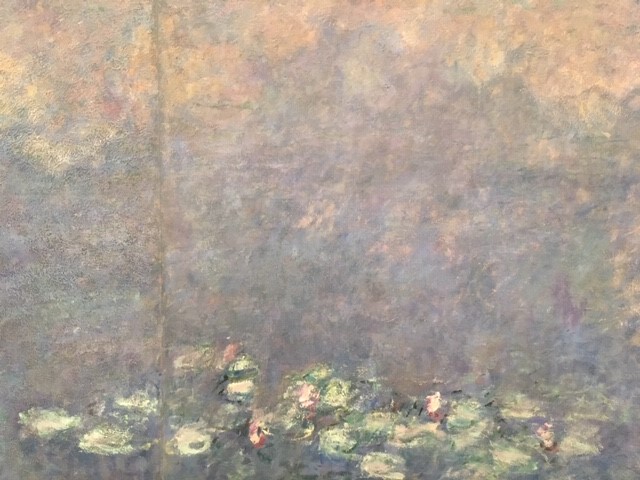