For Lesley and Daisy

How does your garden grow?

With silver bells and cockle shells

And pretty maids all in a row

St Just is awry with a mesh of small lanes

The two squares of the town are a neat higgle piggle

Of The King’s Head, The Wellington, and The Commercial

The tiny Norman Church has a fat stumpy spire

Cornish pasties, and quiches with spice.

The up-market cafes and tiny galleries

Overflow with art and pretty postcards

cushions and lampshades, pictures of animals.

Our first morning, we walked to Cornwall Cove

The sea was green, the sky shifting blue

Blackbirds and sparrows cooed and billed

Delight flooded my heart with scent and good will.

Around every cove, we found artists poised, full of passion

But their acrylics and oils failed the ocean:

Itself, a majestic movement, alive with ripple and strength

But despite this glory, all is not well, in particular, for one individual.

If the galleries could frame the bug that my companion suffers

That has her coughing and rasping, spitting phlegm, a hacking

Cough she screams across cliff tops, a cry even the sea gulls spurn

That would be art – of a different kind, but surely interesting all the same.

The next day, at Bottallack Mine, where I wandered alone,

(My companion nursing herself at home,) I found

the cliffs saturated with tin mine shafts: shifts of human ingenuity

coppered with poverty, restored lovingly by the National Trust.

Round, tall, brick chimneys stand on every outcrop

of black granite rock –  a homage to the mining industry.

According to signs, you must stick to the path

in the Wheal Owles Shaft, drowned because of a daft

miscalculation made in nineteenth century

which misjudged the metallic pull of the earth.

We visited Eden that afternoon. Another secret, bubbly world

blowing smoke rings of oxygen.  These systems are so vast, we cannot feel them

until we enter the Rainforest biome where Turmeric, Pak Choi

The next day, I walk the Cot Valley along the Porth Naven path

It Is luscious with exotic plants, broad and tall, round and green

Jagged and spiky. I don’t know their names.

The cliff and cove are smothered in colour, harsh

Now, its time to pay homage to the the English NHS.

Antibiotic! On top of her bug, she is now suffering shock.

of the public footpath, carefully maintained

By the National Trust with precision and pride.

I believe, the black and white arrows are the true arteries

and veins of the English countryside.

Halfway up Herman Head, I come across a woman

Standing still, reading a book. She is waiting for

Cornish Choughs to return. It seems they are gone

For half an hour to feed. Out to lunch.

And talons that resemble toes, so I’m told.

I double back across the cliff to the Priest’s Cove

The white Count house is a tiered wedding cake.

It stands proud, abreast a nest of terraces and glass.

Below, small fishing boats and lengths of colourful rope

are coiled on Sea Pinks and naval wort

pretty as a picture against a stone wall.

That afternoon, in St Ives, I see a couple on the beach

Breaking up. They seem particularly intense, not touching

but walking, heads close, oblivious to the Springers and Spaniels

the buckets and spades, the playing children, the watchful parents.

over the rippled sands but they don’t notice any of this.

Such a Lowry scene, I think to myself

As I scoff my scone and jam, laded with Cornish cream.

Early next morning, I sit on a stone seat, on the path

to Sennan Cove, staring at a peacock’s tail of blues and greens.

I hear the wash of wave against the rock

Surf splashing a creamy white, calm and quiet until

Bunty from Kent bounds upon the scene, sniffing me,

Joyous to jump and play with anybody. And then comes Sasha

And Jakie, Tomo and Paul. Dogs are popular in Cornwall.

An hour later, at lunch, at the Cove, scrubbed black mussels

float in cream and white wine. I split them open to reveal

the yellow slime of fish. Delicious. A glass of Cornish cider, a bowl

Of chips. Then a snooze on Sennan Beach, in the sand dunes.

Next onto Porth Curno and a cliff top drama

Sculpted into the granite and local wild flowers.

With an ocean curtain. A perfect setting for Shakespeare

Ali Baba and Forty Thieves and, I read, A Perfect World.

On our last day, my companion is on the mend

So we go to St Michael’s Mont, Marazione, an off shore island

Near Penzance. In Cornish, it means ‘hoar rock in woodland’.

Not surprising, as the Baron owner sired 13 illegitimate children.

We take the boat as the causeway is drowned

I land In-tact and alive.

To reach the castle it is a steep climb.

The Baron of Aubyn bought his castle from Monks

Due to his aforementioned sexual pranks

he lost his title, but later morphed into a Lord

who did colonial battle in the Sudan.

From the pictures and weapons, it looked a hell of a battle, blood and

Guts, feathers and helmets strewn all over the land

Which was why, when he returned, he lived in a magical castle

on an island and sniffed snuff from boxes made of tortoise shell, red lacquer

porcelain and created beautiful gardens of cacti and oxeye, palm

pretty maids all in a row. 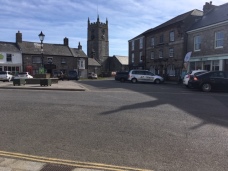 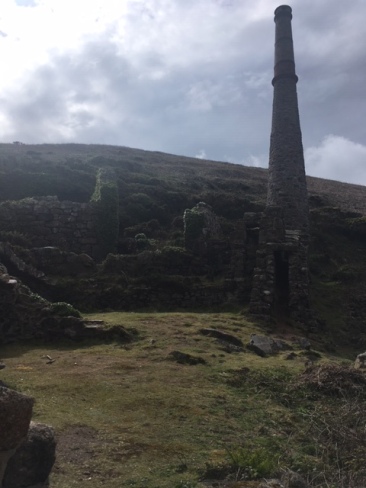