The Northern Line is rumbling three floors beneath and the jumbo jets are en route above. There is a hum of traffic, the occasional siren, and a bird outside but all these noises and vibrations serve to accentuate the early morning silence in the city. It is normal and I feel at home even though in Cavan birdsong, strange flutters and scratchings in the attic, wind and rain would be my early morning accoutrements.

Obviously, I am in London. I am visiting my mother, and staying in my brother’s lovely house in Stockwell. He is not here so I have been able to wine and dine old friends and teenage loves whom I haven’t seen for many years. It leaves me feeling unsettled. It is a little like looking at an old picture book full of people who are familiar but where the story line has gone. I know I am supposed to be the central character, but actually, I feel I have disappeared from the pages. It is most peculiar.

This experience of not belonging to your familiar came up in a discussion with my mother too. She asked me whether I thought I had had a ‘normal’ childhood. I thought about it and said, no I didn’t. Ironically enough, I had two parents (my mother and father stayed together for 37 years) whereas most of my friends’ parents separated. However, my father was rarely there, he travelled a great deal throughout the world, and when he was in London, he always had meetings which meant he didn’t get home until very late. So we had the figurehead of a father but not the reality. But the ‘not’ normal thing was the political and left wing atmosphere of the family. The house was always full of discussion, political prisoners, refugees, people having meetings and drink. It was an exciting environment, but different.

“Did you have a ‘normal’ childhood”, I asked her in return. She thought about it and said, no. Mother was the product of a war wedding between a young glamorous French woman and a Welsh soldier from the valleys. Her mother moved from France to the small mining village where my grandfather taught in South Wales and the relationship was not easy. My mother was an only child and she was sent to France for her summer ‘vacances’ and to Pembrokeshire to the Welsh relatives for the Easter holidays. Her family life was not the normal of others. Her mother wore dressy hats (I loved playing with them when I was little) and well-made Parisian clothes and my mum was very aware that her mother was different. But her own life was normal to her and so maybe not normal became normal and maybe it was translated down a generation in a different way.

In turn, my own children felt they were not raised normally. Our family never fit the bill. We were English in Dublin, and then urban in Cavan, and not religious in a catholic country, to name the obvious.  I was on the dole in Killiney (according to her school teacher, Roisin had to explain to her first class Killiney friends what the ‘dole’ was) and in Cavan I worked as a consultant to the Combat Poverty Agency (Does she give out money?). Neither the husband nor I knew much about Irish country life. Actually, it was me who kept telling the children as we ran up against yet another strange, local, rural custom, “This is not normal!”

Last night I watched the documentary, Christian Dior. Back to Paris. My God, life in the House of Dior is not normal, but, I guess it is the norm in the fashion world. Nor is it normal today in Brussels which is in lock down but will become the norm as a result of Isis activity. Nothing is normal but without normality we cannot function. And often what is not normal becomes normal. It’s a wonderful vicious circle. It is an extraordinary complicated relationship we have with normal.

Last week on FB there was a quiz going round which pulled together the words that you most used on FB. Now, stemming from my Jackie magazine reading days (to go back to my past), I do love a quiz. So I clicked on it. All my FB friends were getting a colourful tapestry of words such as ‘poems’ ‘writing’ ‘edge’ ‘keen’. I clicked on the button three times before I realised it had already come up with the words I use most because I simply couldn’t believe the words were mine. They were ‘family’, ‘love’, ‘daughter’, ‘son’, ‘healthy’ ‘living’. I was mortified. Where was ‘politics,’ ‘women’, ‘writing’, ‘poetry,’ ‘protest.’

A classic example of normality changing….ahhhhhh

PS somethings never change. Waited hours to take a pic of a London bus but one never came. 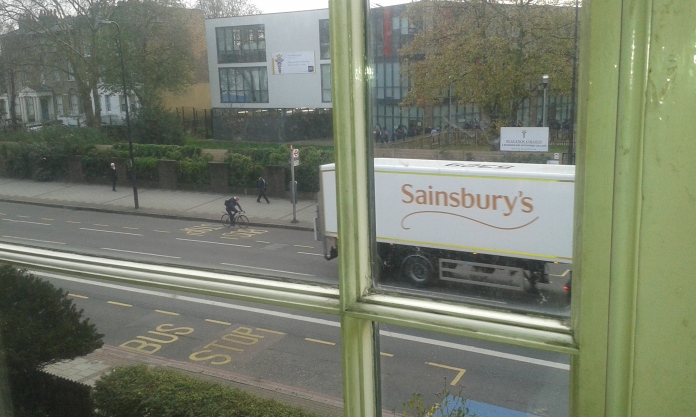